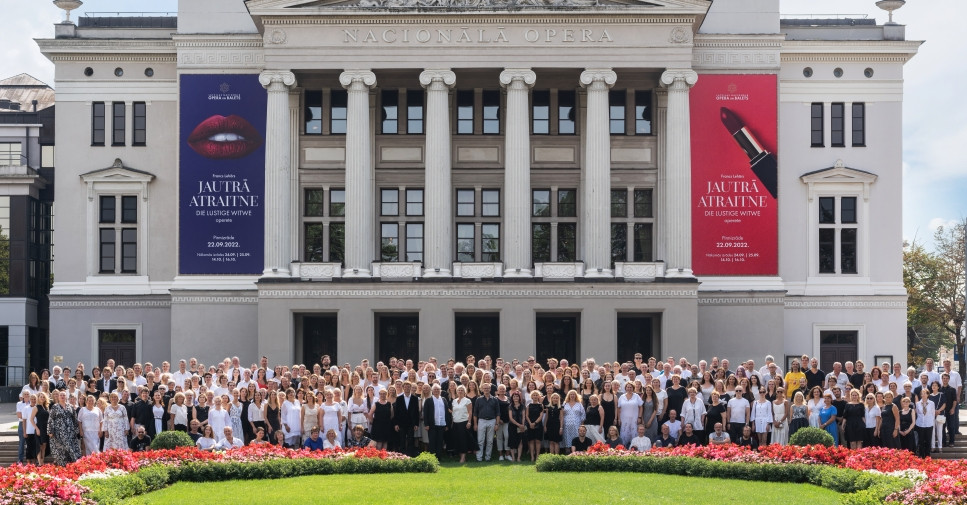 In season 2022/2023, Latvian National Opera and Ballet will offer new productions of two operas, one operetta and two ballets. In autumn, a series of special events will be offered as part of the centenary celebrations of the Latvian National Ballet. Traditionally the season will be closed by the Riga Opera Festival.

Franz Lehár’s operetta "The Merry Widow" will be the first premiere of the season 2022/2023 at the Latvian National Opera and Ballet, it will open on September 22. The new production of the world-famous operetta is being prepared under the leadership of the Music Director and Conductor Tomas Rösner and Stage Director Uwe Eric Laufenberg.

In the last week of October, the Latvian National Opera will host for the first time the prestigious young vocalists’ competition "Operalia", whose Artistic Director is the legendary tenor and conductor Placido Domingo. The finals of the competition will take place on October 30, when the finalists will perform accompanied by the LNOB orchestra under the baton of Plácido Domingo.

“The Wayward Daughter”, the first full-length performance of the Latvian National Ballet took place on December 1, 1922. In the fall of 2022, our ballet will celebrate its centenary with an extensive program, culminating with the Gala Concert "Latvian National Ballet 100" on December 1. The history and present of the ballet will be reflected in photographs, films, a book, new ballet productions and other special events.

In one evening, two 20th and 21st century classics – George Balanchine’s ballet “Serenade” and Edward Clug’s contemporary choreography for Carl Orff's oratorio “Carmina Burana” – will meet on the Grand Stage of the Latvian National Opera. The production will open on November 5.

A diverse program will complement the stage events. The first event will be a photo exhibition dedicated to the present of the Latvian National Ballet, which will be on display at the Latvian Museum of Photography from September 29. The exhibition will include photopraphy series by Iveta Gabaliņa, Agnese Zeltiņa, Kristīne Madjare, Vika Eksta, Andrejs Strokin, Jānis Deinats and Reinis Hofmanis.

Three Sundays in November will be devoted to the event cycle “Cinema and Ballet”, the showcase of new and older films. The showcase will begin on November 6th with the program “Ballet Constellation” – short films by the students of the Latvian Academy of Culture National Film School, showing film portraits of former stars of the Latvian National Ballet. The program will be continued on November 13th with events “The Prima Ballerinas” (films about Helēna Tangijeva-Birzniece and Anna Priede) and “The Pricipals” (films about Aleksandrs Lembergs and Aleksejs Avečkins). The showcase will end on November 20th with event “Before the Curtain” – premiere of the ballet short films, created by directors Katrīna Neiburga, Ineta Sipunova, Ivars Zviedris, Juris Paklniņš and Uģis Olte.

Tatiana Trenogina, soloist of the Latvian National Opera, and pianist Māris Skuja invite to a special concert in the New Hall on December 9th. The concert program will feature the vocal music by Richard Strauss.

At the end of the year, from December 27 to 30, we invite to the audience's favorite events – New Year Gala at the Opera and performances of Pyotr Tchaikovsky's ballet "The Nutcracker".

The production of the opera "Jenůfa" by Leoš Janáček will open in February. The production directed by Alvis Hermanis, was originally produced for La Monnaie in Brussels and later was performed also in Bologna and Poznań. Now this highly regarded performance will be available in Riga.

The premiere of the ballet "Viy" will take place in April. The ballet is based on the story by Nikolai Gogol and Ukrainian folklore. The music for the new production is created by the Ukrainian composer Oleksandr Rodionov and the choreography by Radu Poklitaru. In the hands of the creative team, the horror story created by Gogol will turn into a modern ballet production.

The last new production of the season will be Francesco Cilea's opera "Adriana Lecouvreur", staged by the French Director Vincent Boussard, already known to Latvian audiences after the opera "Dialogues des Carmélites” by Francis Poulenc's previously staged at the LNOB. The premiere of “Adriana Lecouvreur” will open the Riga Opera Festival 2023.